Been reading a little about William Manly’s exploits.

Manly is famous for being part of, and chronicling, an epic ordeal in 1849 that gave Death Valley and the Funeral Mountains, in the eastern Mojave Desert of California, their names.

He passed through these extreme and remote regions due to a series of events beginning when he and a few other wagon teamsters decided to part ways with a small wagon train they’d been driving to California during the gold rush. The owner had decided to over-winter in Salt Lake City, to avoid crossing the Sierra Nevada and a possible repeat of the Donner Party tragedy of 1847, but he refused to provide any over-winter support whatsoever to the teamsters. Manly and the others were also worried about the new Mormon population at Salt Lake, who were reported to be very hostile to midwesterners, due to the persecution they’d received there, which had culminated in the murder of their leader Joseph Smith only five years prior. 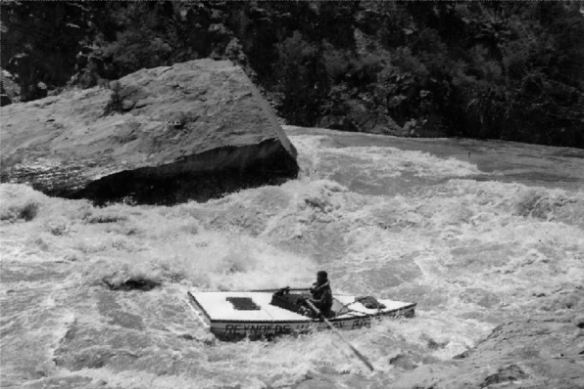 So, the two groups parted company at the Green River in Wyoming, at high elevation where the Green is still a small river coming out of the spectacular Wind River range. Manley and his group thought it might be possible to float all the way to the Pacific Ocean, bypassing overland travel altogether.

At that time, a common, longstanding belief was that the Green/Colorado river system emptied into the Pacific Ocean somewhere in California (the fabled Rio Buenoventura); John Fremont had in fact dispelled that notion only a few years earlier, but they apparently weren’t aware of this. To get started on the upper Green, they’d have to use a very small ferry boat they’d discovered buried in a sand bar while crossing the river. They had essentially no idea whatsoever of what laid ahead of them downstream, such as depicted in the image below and the second image above, and worse.

The Lodore Canyon of the Green River, downstream of Ashley Falls, in Dinosaur National Monument, Colorado.

Like so many early explorations, the book is full of interesting stories. One example is given by the following passage, from an incident in the canyons of the Uinta mountains in far NE Utah (buried under Flaming Gorge Reservoir since 1963). They were navigating some serious whitewater in a boat entirely unequipped for it, and had seen almost no sign that anybody had been down the river before. Negotiating the serious rapid later named Ashley Falls, Manly writes:

Just before night we came to a place where some huge rocks as large as cabins had fallen down from the mountain, completely filling up the river bed, and making it completely impassible for our boat. We unloaded it and while the boys held the stern line, I took off my clothes and pushed the boat out into the torrent which ran around the rocks, letting them pay the line out slowly till it was just right. Then I sang out to–“Let go”–and away it dashed. I grasped the bow line, and at the first chance jumped overboard and got to shore, when I held the boat and brought it in below the obstructions…

While I was looking up toward the mountain top, and along down the rocky wall, I saw a smooth place about fifty feet above where the great rocks had broken out, and there, painted in large black letters, were the words “ASHLEY, 1824.” This was the first real evidence we had of the presence of a white man in this wild place, and from this record it seems that twenty-five years before some venturesome man had here inscribed his name. I have since heard there were some persons in St. Louis of this name, and of some circumstances which may link them with this early traveler.

When we came to look around we found that another big rock blocked the channel 300 yards below, and the water rushed around it with a terrible swirl. So we unloaded the boat again and made the attempt to get around it as we did the other rocks. We tried to get across the river but failed. We now, all but one, got on the great rock with our poles, and the one man was to ease the boat down with the rope as far as he could, then let go and we would stop it with our poles and push it out into the stream and let it go over, but the current was so strong that when the boat struck the rock we could not stop it, and the gunwale next to us rose, and the other went down, so that in a second the boat stood edgewise in the water and the bottom tight against the big rock, and the strong current pinned it there so tight that we could no more move it than we could move the rock itself.

This seemed a very sudden ending to our voyage and there were some very rapid thoughts as to whether we would not be safer among the Mormons than out in this wild country, afoot and alone. Our boat was surely lost beyond hope, and something must be done…

Classic. If you’ve ever pinned a raft or kayak on a rock in a rapid, you can picture this scene exactly, but not nearly with the same level of consequence.

The main point though, is that, even many years later, Manly clearly had no idea that the inscription he saw was done by none other than William H. Ashley, of Rocky Mountain Fur Company fame, and later a three term Congressman from Missouri (he was indeed from St. Louis). The Company was directly responsible for starting the careers of many famous mountain men, such as Jim Bridger, Thomas Fitzpatrick, Kit Carson and others, and as far as is known, made the first documented exploration of the upper Green River, in 1824/25, fully 55 years before John Wesley Powell’s famous explorations of the entire Green/Colorado system, and 25 years before Manly’s party.