So, I’ve been learning a couple of Gordon Lightfoot songs lately, and reading various things, and thinking about my home town. And also realizing that Indian Summer will soon give way to something much less enjoyable. So this post is about all that.

A couple of days ago in the library I’m reading the January 2014 entries for the “Great Lakes Calendar” in the journal Inland Seas–a month that caused all kinds of mayhem on the Lakes, mostly involving ice and the breaking thereof. There, I see it noted that on Jan. 3 the “Wilfred Sykes loaded at Escanaba and was escorted by the tug Erika Kobasic“. The next day, up on Superior, the “Downbound Arthur M. Anderson stopped…to await daylight before attempting the Rock Cut…” while way down on Lake Erie “The Griffon was expected to…break out the ice-bound Cuyahoga, stopped at the end of the Sandusky Bay ship channel by heavily packed ice”. And that the next day, the Anderson was right behind the 1000 foot Mesabi Miner, when the latter rammed the ice breaker Hollyhock after an ice ridge slowed the breaker down, about 22 miles west of the Mackinac Bridge. 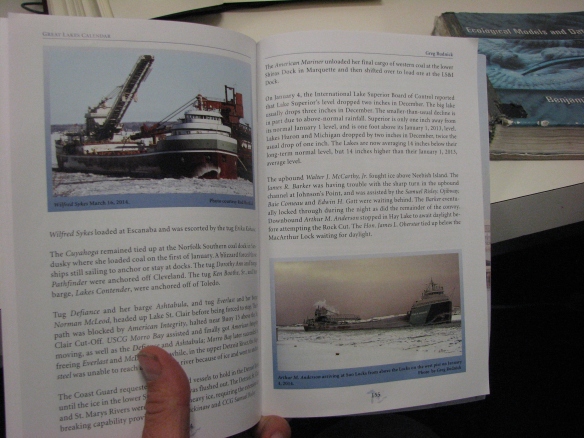 I’m only marginally familiar with Great Lakes maritime history but I recognized two of those ship names immediately: they are tied to two major Great Lakes shipwrecks, and the very two that bracket all of the major maritime disasters no less. These ship names are the Griffon and the Arthur M. Anderson. The third one involved was the Wilfred Sykes.

The Griffon was the very first masted sailing ship on the Great Lakes, built by Robert LaSalle’s crew somewhere along the Niagara river, Canadian side, in 1679. It sailed across Lakes Erie, St Clair, Huron and Michigan to the vicinity of what is now Green Bay Wisconsin before sinking in far northern Lake Michigan, loaded with furs, on its return voyage. LaSalle was not killed however, as he had decided to head south overland to explore a connection between the Great Lakes and Mississippi drainages (and then overland from there all the way back to Montreal!). Like just about everything the French explorers and trappers did in the area at the time, it’s a thoroughly outrageous story.

At the recent end, there’s presumably no need to mention what the last major Great Lakes ship disaster was, due at least in part to Lightfoot’s famous and outstanding ballad.

The Arthur M. Anderson was very intimately involved in the entire episode. It was the Anderson that trailed 10 to 20 miles behind one Edmund Fitzgerald, kept in radio communication with it, helped it navigate after its radar went out, and first alerted the US Coast Guard of its disappearance from the radar. Most heroically, it performed the first SAR (search and rescue) operation for potential survivors, right during the height of the storm. The ship had in fact already reached the relative safety of Whitefish Bay, but upon request by the Coast Guard, it voluntarily returned out into the horrendous open water conditions to perform the search. Which speaks volumes about the ship’s captain.

The Wilfred Sykes is involved also. It loaded ore at the same dock at the same time as the Fitzgerald, and was also bound for the Soo locks. But its captain, having looked closely at the weather forecast of a major storm crossing the lake, had decided to track close to the Ontario shoreline instead of across open water. Therefore, it was just the Fitzgerald and the Anderson that crossed the lake together on the furious and fateful afternoon and evening of November 10, 1975. [That link goes to a very interesting paper that recreates the wind and wave conditions before and during the storm, using a weather model, the available surface observations, and a wind-wave model.]

Nearly 40 years later, the mystery of exactly what led to the sinking is still not fully resolved. It is known that the ship sank so fast in such ferocious conditions that there was no chance for survival. The incident was major news in the Great Lakes area at the time, even nationally, and nowhere moreso than in Toledo Ohio. About 5 or 6 (strictly from memory) of the crew of 29 lived in the area. This included the captain, Ernest McSorley, who lived about 7 or 8 miles from us, and was tragically on his very last voyage before retirement. [The most common run of the Fitzgerald was from Superior Wisconsin, to either Detroit or Toledo.] I can still vividly remember the front page story in the Toledo Blade the next day with the pictures of the missing crew. It seemed unbelievable that this could happen. The Great Lakes are littered with uncounted shipwrecks, but this was 1975.

Anyway, today I’m back in the same library, this time reading J.B. Mansfield’s History of the Great Lakes wherein I read:

“Another very interesting, and very sad, thing about this lake [Superior], says W.S. Harwood in St. Nicholas, is that it never gives up its dead. Whoever encounters terrible disaster— happily infrequent in the tourist season—and goes down in the angry, beautiful blue waters, never comes up again. From those earliest days when the daring French voyageurs in their trim birch-bark canoes skirted the picturesque shores of this noble but relentless lake, down to this present moment, those who have met their deaths in mid-Superior still lie at the stonepaved bottom. It may be said that, so very cold is the water, some of their bodies may have been preserved through the centuries. Sometimes, not far from the shore, the bodies of people who have been wrecked from fishing-smacks or from pleasure-boats overtaken by a cruel squall have been recovered, but only after the most heroic efforts with drag-net or by the diver.”

So, to get back to the title, this is the origin, or at least the earliest known explanation, of the sentence “The Lake it is said never gives up her dead, when the gales of November come early” in Gordon Lightfoot’s song. More on that whole issue is here.

“And all that remains are the faces and the names of the wives, and the sons and the daughters.”