Captain McSorley lived right over on Bancroft Street just a few miles from us, near the university, but we had no idea until the newspaper told us. He was apparently intending to retire at the end of the season, just one month away, and was thus on one of his last trips. It turned out to be his very last.

I hadn’t even heard about the incident until I opened the paper the following day: there was the full story on the front page, with photographs of the seven guys from the area, about 25% of the crew of 29, including the Captain, who were now all missing and presumed dead. You can’t last long in 50 degree (F) water, that much less with hurricane strength winds raging around you in the middle of a black night in November, far from the shore.

The whole thing struck me as rather unbelievable. I mean, I can remember going out the few miles to one of the Lake Erie Islands as a Boy Scout when a kid. Somehow the trip had been scheduled at night, on a ferry with big open sides, and sure enough, there was a fierce wind that night. The boat was constantly plunging up and down with the waves that have made the lake a bit notorious and sent many a boat to the bottom, back in the day. Big washes of water and spray would come in through the holes, some kids were getting seasick and throwing up, and it was pitch dark. We were probably in no real danger but as a kid you don’t know that, and it may have been the first time I was actually scared for my life. 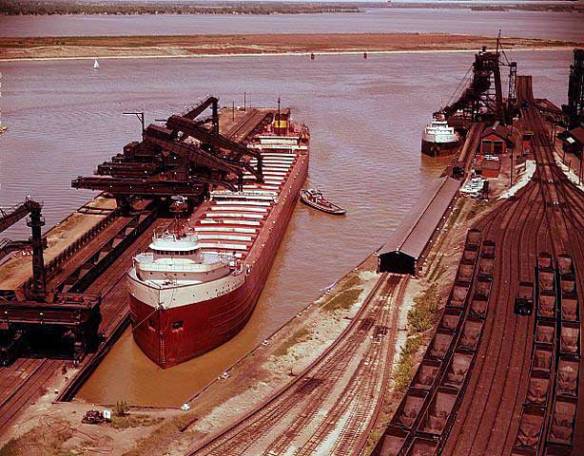 Nine years ago, Hultquist et al published an interesting study in which they ran a weather and wave model over the general area, driven by recorded observations during the event, for the 36 hours leading up to it. What they basically found was that the ship could not possibly have chosen a worse path across the lake than they did that day. They made a 90 degree right turn that put the ship partially broadside to maximum sustained winds from the west to northwest, of 65 knots (~ 75 mph, the lower edge of hurricane force, and gusting higher), and to significant waves of 7.5 m (~25 ft), potentially reaching as high as 14 m (46 ft). Another wave height model indicates such heights and directions were likely extremely rare historically.

Significantly, the weather/wave model indicated that the worst 1-hr conditions occurred exactly when the ship when down–between 7:00 and 8:00 PM, EST. At about 7:15 PM, the Fitzgerald simply disappeared from the radar screen of the Arthur M. Anderson, which had been trailing it by 10 miles, and guiding it by radio ever since the Fitzgerald’s radar went down. [The interesting back and forth between the Anderson‘s Captain and the Coast Guard, requesting him to go back out to search the area during the height of the storm, which he did, is here.] 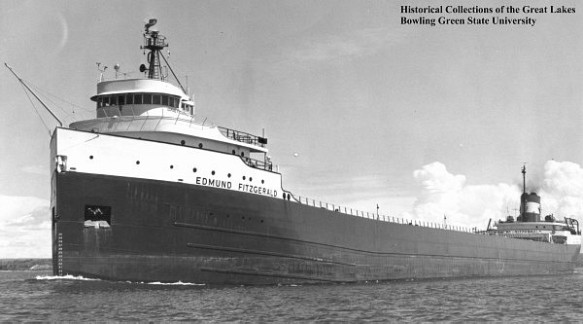 Exactly what caused the Fitzgerald to go down so quickly is still a matter of some contention. It had to be immediate, since the ship had just been in radio contact with the Anderson but no SOS or distress call was ever issued. The leading theory seems to be that a particularly extreme wave lifted the stern, forcing down the bow. The ship was already listing and had lost buoyancy via large volumes of water taken into its cargo holds, full of iron ore, very possibly from ripping a hole in the hull by bottoming out on a shoal a few hours previously. This would have rocketed the ship to the bottom of the lake, which, being shallower than the ship was long, would have snapped it in two (as it was found), with the stern above the water.

Captain Cooper of the Anderson, describes his radio interactions with McSorley before the incident and his views of what happened. He says that as much as 12 feet of water were on their deck at times:

And all that remain, are the faces and the names
Of the wives, and the sons, and the daughters
Gordon Lightfoot, The Wreck of the Edmund Fitzgerald

2 thoughts on “‘Twas the Witch of November, come stealin’”