Independence Day, anniversary no. 241 is upon us, a holiday surely on the short list of important ones in the United States. There’s no end to the philosophical and political ideas that can be, and have been, expounded upon. But as for me, I’m thinking about connections inspired by the research and personal reading I’ve been doing lately. Bear with me grizzlies, while I attempt to connect genetic research on rare California plants to American history.

I started graduate school in genetics, not ecology, and that field has always been the most fascinating to me. I’m in fact currently working on a topic that bridges the two fields, referred to as genetic biocontrol, the aim of which is to use genetic methods to reduce fitness, and hence population sizes, of harmful or otherwise unwanted species. So, I was sad to learn in a recent special issue devoted to the work of Dr. Leslie Gottlieb of UC Davis, on polyploid genetics, that he had passed away five years ago. The major focal taxon of Gottlieb’s work was the genus Clarkia, and I had some good conversations with him when I was doing restoration and propagation work on a very rare Clarkia (C. lingulata) endemic to the Merced River canyon, the main river flowing into, and through, Yosemite Valley. This is a famous species in plant genetics, cited in textbooks as an example of instantaneous speciation (see here and here), derived from it’s progenitor, Clarkia biloba. Clarkia lingulata is found in only two populations near the junction of the South Fork Merced with its main stem, a few miles west of the western boundary of Yosemite National Park.

Said River of Mercy is not merciful this year though, or any time at high water, should you happen to be in it. It is uncontrolled, and at high water rages through a steep, boulder filled death sieve as it leaves Yosemite Valley and heads for the San Joaquin. I still remember well the day that a woman, with her three kids, fell asleep at the wheel after driving all night, and drove off the road and into the river at daybreak, just above this location, drowning them all. When I was kayaking, the Merced was the only river that ever scared me off the river, although part of that was due to being solo and exhausted, which is a full-on recipe for disaster. There is also some very interesting history regarding Clarkia lingulata‘s location, one involving the cause of the American discovery of Yosemite Valley in 1851, but I won’t go into that here.

In one of our discussions, Les discussed some aspects of another rare Clarkia species he was working with, Clarkia franciscana. The species is so named because it is found only in the immediate area of the San Francisco Presidio–and this makes for a segue from genetics to history, involving the SF Presidio, Spain, Mexico and the United States, Upper (or New) California, and July of 1776.

The history of what is now the state of California has, I think, to rank as one of the most interesting of any in the world, and especially so from 1846 to 1850. Just a week before the momentous event in Philadelphia, a small group of Spanish Franciscans, with a small military escort, arrived from the Carmel River area (just south of present Monterey, CA), to extend the Spanish Upper California dominion northward by establishing their third presidio (military base and/or fort, the first two being at San Diego and Monterey in 1769/1770), and with it another mission of course. These establishments were significant because both were to carry the name of the order’s founder, Saint Francis of Assisi.

On June 27 1776, this group came upon a small creek draining the peninsular hills east (toward San Francisco Bay), which they named Dolores, and decided that this would serve as the future mission site. On June 29 they established an altar and consecrated the site, and then began looking for a strategic location for the presidio and fort, which they located on a high bluff commanding the narrow entrance to the bay (the “Golden Gate”), just to the water side of what is now the southern anchorage of the Golden Gate Bridge. 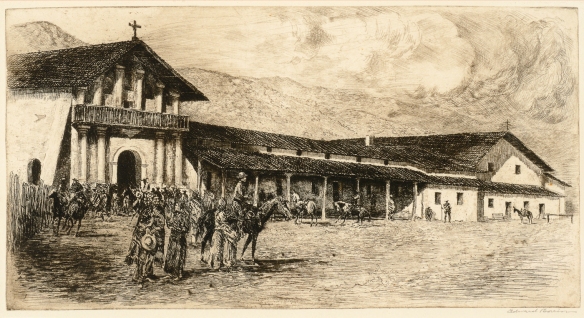 A depiction of Mission Dolores circa 1893 by Edward Borein

At this point, books worth of material could be inserted discussing the Spanish (and after 1822, Mexican) discovery, settlement and management of Upper California, and with jaw fairly agape at both the process and the end result (circa 1848), for much of it. And we, with the benefit of 20/20 hindsight, wouldn’t be the first to do so either–the Russians, the British, and especially the Americans, of that time, did so also. It’s documented in various writings, which are for me at least, entirely fascinating. Some of it seems to defy logic. If anyone could write an authoritative book titled “Imperial expansion: how not to do it”, it would have to be the Spanish and/or Mexicans.

To say that things went downhill for the Spanish from 1776 to 1848 would be the understatement of the century. Twenty-one missions were established in Upper California during the “mission period” from 1769 to the American conquest in 1846, but for various reasons including Russian presence starting around 1805, only two north of Mission Dolores (Missions San Rafael and Solano), and both of those quite late in the game. The events in Philadelphia five days after consecration of the Mission San Francisco de Assis (= Dolores) site, caused the Spanish to pull back on several intended plans in northwestern New Spain, now the western United States, including expansion north of San Francisco Bay and another plan for a series of missions in the interior lands east and south of it. 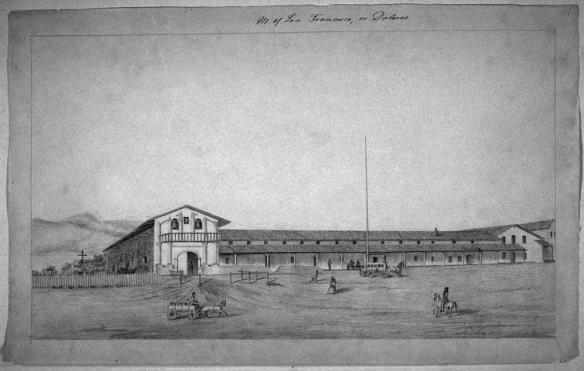 Mission Dolores circa 1842 by Henry Miller

One argument has it that in so doing the Spanish were hoping to marshall their energies to re-claim parts of Spanish Florida lost initially to the French, and hence to the British after 1763, thinking that the Revolutionary War might offer their best chance to do so. But this plan, along with apparently about everything the Spanish and Mexicans did from 1800-1850, backfired. Not only did they not increase Spanish Florida, they quickly lost what they already had. This was followed later (1822) by the entire loss of New Spain, i.e. Mexican independence. The fracturing of the once vast Spanish empire then continued as the Mexicans in turn quickly lost Texas to independence, whose annexation by the United States about a decade later thus led to the Mexican-American war. In amazingly short order therein, they then managed to not only not reclaim Texan territory, but instead to astoundingly quickly lose both California and New Mexico. This was followed in less than a year by surrender, and with it the additional loss of what are now roughly the states of Utah, Nevada and Arizona. The total area is a large and very valuable chunk of real estate, by any standard.

I’m no historian, though I read my fair share, but compared to the serious difficulties and drain of two wars with the British spanning 40 years, and the even more extended and often ferocious wars with various Native American tribes, this sudden acquisition of a vast, important territory without much of a fight stands out. James Marshall discovered gold in the tail race of John Sutter’s sawmill east of what is now Sacramento just about two weeks before the Treaty of Guadalupe-Hidalgo officially ceded all this territory to the United States. That this should happen to a people who had historically been obsessed and sometimes deluded by various fantastic stories regarding that material, kind of says it all. Marshall and Sutter tried to keep the discovery secret for a couple of months but that was a lost cause, and they likely knew it–it was a virtual certainty that the gold veins and placer deposits that ran up and down half the Sierra Nevada, and elsewhere, would be found in almost no time by those about to pour unobstructed into what was now the United States. And so they poured. And the rest as they say…

12 thoughts on “On a mission on Independence Day”