Last week after I put up part four of this series, there was some discussion regarding demonstration/specification of the claims presented there.  I gave it some thought and decided that, since I’ve already described the fundamental issues involved, and framed the approach taken, the cat is really already out of the bag, so I might as well demonstrate it with some code. As mentioned, I could not put up the full code, nor simply extract a snippet from the jungle that it is, so I wrote something much briefer that does the job (I think).  Perhaps it was a needed exercise anyway, to prove to myself that some wires didn’t get crossed somewhere. Discussion is welcome.

The code is here. Please heed the notice at the top!

update 1: I’ve made a few improvements in the code comments and very minor changes in the graph output
update 2: Couple of graphs added, using a = 0 and b = 0.1, for sake of reference/discussion:
update 3: A few more code improvements made, code for a second graph added, other clarifications etc; probably leave it at that.
update 4: a few more changes, as noted in the code, and revised graphs here 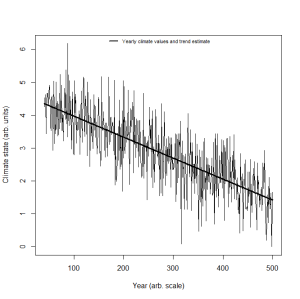